Arizona has 3 draw seasons per year. During those draw seasons, hunters can apply for roughly 70 antelope hunts, 200+ deer hunts and over 200+ elk hunts. One of the things that make Arizona draw and harvest statistics tricky to read is that hunt numbers change from year to year. The image below shows the same hunt number from 2018 and 2019. The season position and manner of take have changed. Luckily, HuntScore has created a psuedo hunt code to track draw statistics across time. You can check out Arizona hunt brochures here.

Below is an example of how hunt codes can change! 2019 Arizona Hunt Number 3070 is a Youth-Only 1st Season Elk Hunt 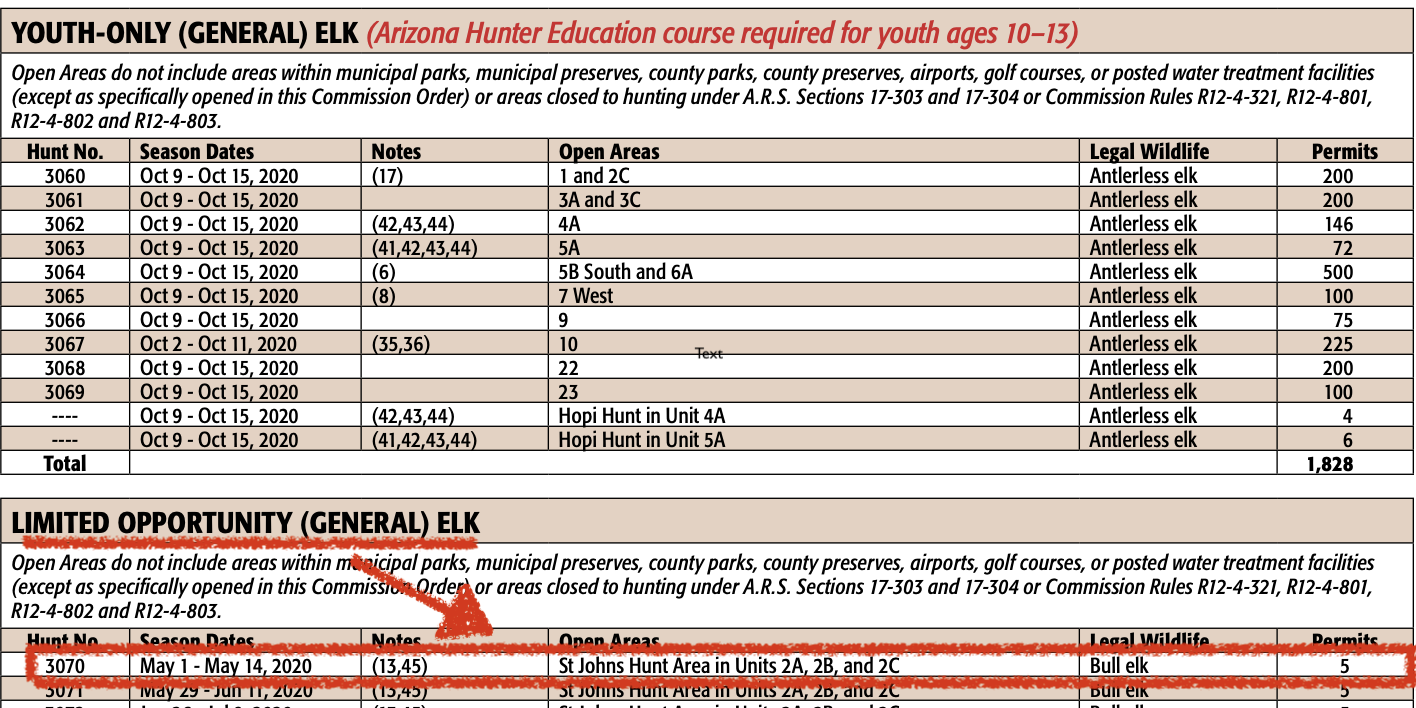 While Arizona hunt numbers will change from year to year, seasons and manners of take are more consistent. So we've modeled our hunt codes based on the way hunters view the regulations. For a given species, a hunter will look at a unit, hunt type (youth, mobility impared, etc...), weapon type (manner), sex and season dates. These criteria define a hunt for a given species. Let's show a tangible example!

Each hunt code is made up of eight characters (not including dashes) representing five different pieces of information: species, sex, unit (GMU), season, and manner of take for a particular hunt. Let’s take a look at each of these below for Unit 3A in Arizona.

We can see from the Arizona draw information booklet that Unit 3A has two opportunties to hunt in the General season which allows all manner of take. The first season occurs in late September while the second season occurs in late November. There are significantly more tags available during the second season. The first season is likely during or just after the rut so big bulls are likely to be very responsive during that time. Because of this, we'd expect draw odds to be significantly lower for the 1st season compared to the 2nd season. Since folks who draw this tag can also hunt in Unit 3C, that unit will show the same statistics.

Above is the hunt code for Unit 3A's General 1st Season Bull Elk Season. Let's break down how it is constructed. Note that we use "_" to construct the code.

The hunt code leads with the unit for which the hunt takes place in.

The next letter and number identify the season and dates for the hunt. The earliest date for the season will be ranked as 1st and so on thereafter.

The fourth block represents the sex.

Manner of take indicates the type of weapon(s) allowed during a season.

ALL = All manners are allowed, typically archery, muzzleloader and rifle
R = Rifle
A = Archery
M = Muzzleloader

Season which the hunt takes place.